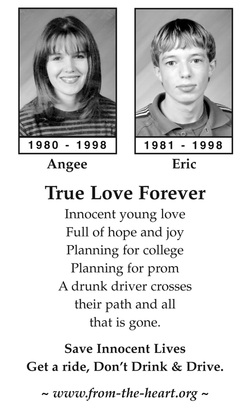 “Today is our eight-month anniversary,” Angie had written in the journal she kept. “I hope we do something special today.”
By 8 that evening, the high school junior and her boyfriend were both dead, killed by a drunk driver.
It will be several years that have gone by now but Nancy Scharenbroich remembers it as if it were yesterday.
Her son, Eric, was studying with Angie at her home in Valley Springs, and with a strict school-night curfew, she knew that Angie would soon be dropping off Eric at the Scharenbroich home in Brandon.
But as Nancy drove home from work, she was passed on Rice Street by an ambulance – lights flashing, sirens screaming.
“My heart started pounding,” Scharenbroich recalls. Her intuition told her that something was very, very wrong. Instead of heading home, she followed the ambulance as it sped through Brandon and then eastward, down the road toward Valley Springs.
There, on the outskirts of Brandon where the bridge spans Splitrock Creek, Scharenbroich came upon a horrible sight.
It took a few minutes to comprehend what had happened – there was Angie’s car, crushed between a pickup and a bridge barrier, almost unrecognizable.
“I saw that it was blue with stickers in the window, and when they gave me the description, I knew,” Scharenbroich said.
“I called Angie’s mom, and verified that they had just left eight or 10 minutes ago. I told her, then I called my husband.”
Awful as it was, “I was blessed to be there,” she says. “I didn’t get that knock at the door.”
The driver of the pickup truck had just turned 21, and his blood alcohol content was twice the legal limit. Investigators determined that he had hit a guardrail, hit his own head on the dashboard and fell under it, then careened into the oncoming vehicle at 76 mph. He survived.
Nancy Scharenbroich couldn’t make any sense of it, and in the weeks that followed, she interviewed the investigating officers, EMTs who were on the scene – anybody who might have information.
For her, not only was Eric and Angee's death a tragedy, it literally changed the direction of her life.
“I stood on that bridge that night, and I remember screaming, saying… ‘Why did this have to happen? This is so preventable! Why didn’t someone do something about this?’”
And when her initial grief had passed, Scharenbroich and Rozeboom decided they would do something about it. They began a small nonprofit organization called “From the H.E.A.R.T” – Help Eliminate Alcohol-Related Tragedies. The goal was simple: to remove drunk drivers from the roads.
To do that, Scharenbroich reckoned, she would have to increase public awareness. She began by speaking to anyone who would listen to her message about drunk drivers, handing out brochures, keychains, and diamond-shaped road sign stickers with the message “Get A Ride/Don’t Drink & Drive.”
Scharenbroich has spoken to over 18,000 school children in Minnesota, Iowa, and South Dakota, and given away over 300,000 of her “Get a Ride” stickers.
Her biggest coup to date has been her work with South Dakota Public Safety. About a year ago, she contacted Tom Dravland and suggested real road signs like the miniatures she hands out. Together, and with the input of Dravland’s Safety Committee, Scharenbroich’s idea morphed into the 911 project, a campaign that includes 30 signs asking drivers to call 911 immediately when they see a drunk driver.
“Tom Dravland took this idea to the next level,” Scharenbroich says. She believes the signs and the 911 plan will empower sober drivers to take back the roads. The “cell phone posse” can have an impact.
“It’s a choice we all have to make,” she says.
“Hopefully, we can produce measurable results. When people make choices, you can change lives. And you never know just whose life you’ll change!”